(NewsNation) — A growing number of Republicans and Democrats think members of the opposite party are “immoral” as exasperation over the two-party system swells, according to a recent Pew Research Center study.

More party members also characterized their oppostion as close-minded, dishonest, unintelligent and lazy — more now than in 2016, according to the study. The findings coincide with growing support for a third political party.

“There have been times in our history, you certainly think of the period after the Civil War, where there was a lot of polarization,” said Paul Beck, a professor emeritus of political science at Ohio State University. “We’ve kind of returned to that level of polarization, maybe even greater than it was at that particular point in time.”

Some Americans historically will not choose a party to side with, theoretically creating a potential base for a third party.

“The problem is, they don’t agree,” Beck said. 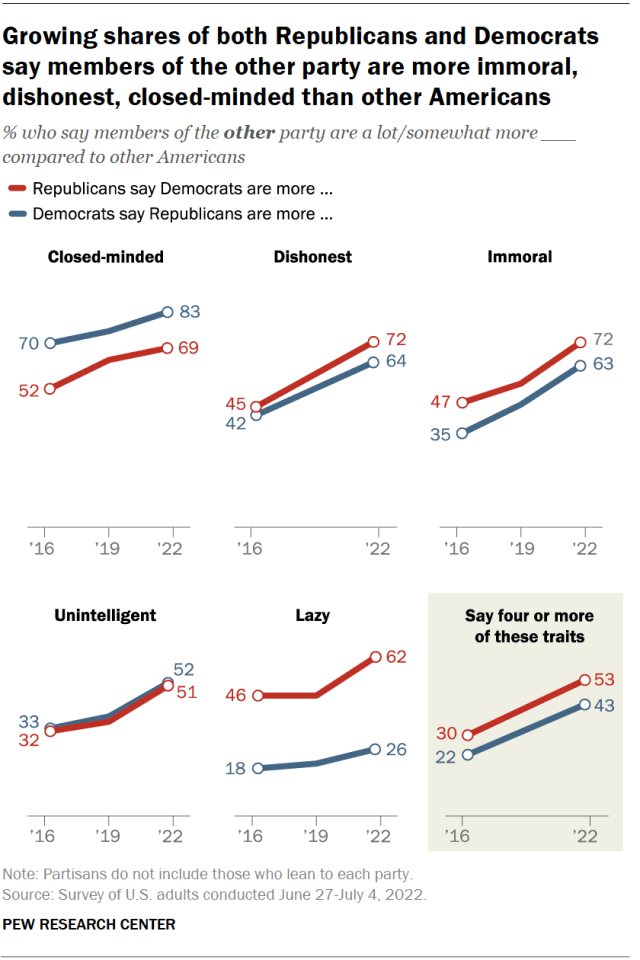 “They aren’t a firm base for a third party,” Beck also said. “And they’re led away from the two major parties for different reasons.”

Support for more political parties is highest among independents and more broadly supported by Democrats than Republicans.

Although plenty of Americans support a hypothetical third party, a separate 2018 report by the Democracy Fund Voter Study Group affirms Beck’s assessment, noting that a third of these voters want a party in the center of the political spectrum, while others want something either right of Republicans or left of Democrats.

The most recent attempt at a more robust third party comes from former Democratic presidential candidate Andrew Yang. The new party, called Forward, will initially be co-chaired by Yang and Christine Todd Whitman, the former Republican governor of New Jersey.

In an interview on “The Chris Cuomo Project” podcast, Yang told the incoming NewsNation host the Forward Party will be the third-largest in the country and already is approaching a budget of $10 million.

Yang said the funding would go toward “patriots … leaders who realize that the system’s broken and needs to get fixed.”

“This will be a political home for the majority of Americans who want to move past the era of divisiveness and do-nothing politicians — so that our government starts working again,” according to a statement on the party’s website.

Increasingly, those who lean Democratic say they no longer want to identify with the party because of its leadership. Meanwhile, the GOP is divided over leaders who endorse Trump’s false election claims.

U.S. Rep. Liz Cheney — who recently lost her reelection bid in the Wyoming Republican primary — established an increasingly staunch opposition to Trump and served on the House select committee investigating the Jan. 6 insurrection.

If Cheney’s next step were to announce a presidential bid as an independent, it’s unlikely she would win, Beck said. Her candidacy, however, like those of independent candidates in the past, could still impact the overall election.

“The potential that third parties have … is to be spoilers in the election, to prevent one of the candidates from achieving those plurality wins (and) from coming in first,” Beck said. “That candidate siphons off some of the support (for) a major-party candidate.” 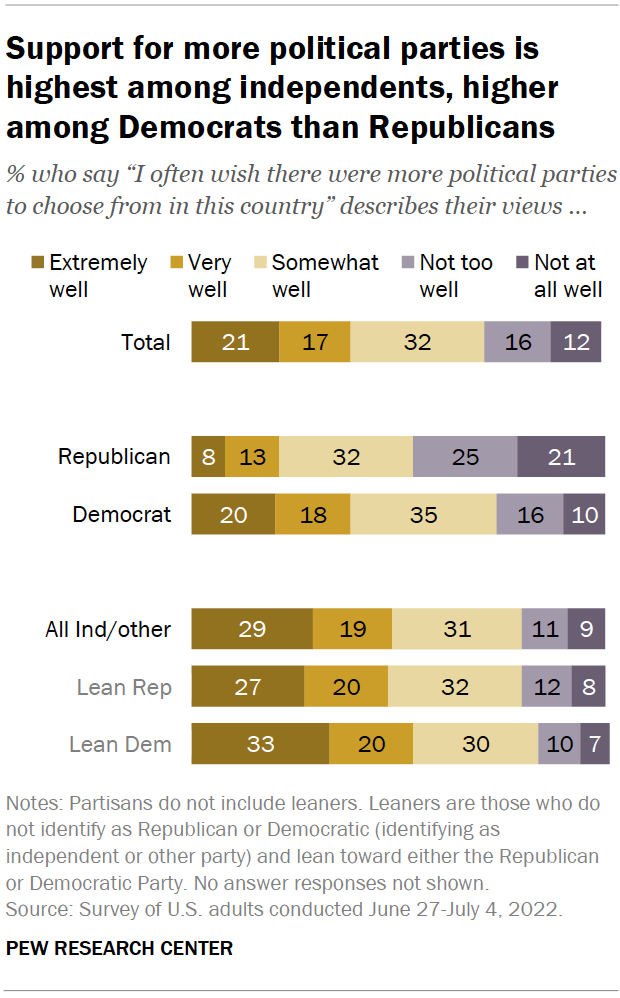 American voters, though, tend to vote strategically, which sometimes means overlooking the person they think is best for the job.

“They’re thinking, ‘I can vote for this-third party candidate who is more attractive to me than either the Democratic nominee or the Republican nominee, but that candidate is likely to lose.”

That’s one prominent reason third-party options are often beaten out by the nation’s two dominant parties — no matter how frustrated the public might be with those choices, Beck said.

Forward is expected to host a national convention next summer and has planned a national tour with stops in 15 states this fall.

“It could happen,” Beck said. “Are voters disgruntled enough or — ‘are there enough disgruntled voters’ may be the way to say it — who are quite willing to vote sincerely rather than strategically? I think that remains to be seen in the lead-up to the 2024 contest. I’m very doubtful that there will be a lot of disgruntlement.”

'Arrests will be made': Boudreaux on Goshen homicides

An old elementary school in Chicago is being turned into a shelter for 250 migrants. Some area residents are not happy about it.

Biden says no F-16s for Ukraine as Russia claims gains

Asked if the United States would provide the jets, Biden told reporters at the White House on Monday, "No."

Former Twitter executives are set to testify next month before the House Oversight and Accountability Committee about the social media platform’s decisions surrounding a 2020 news story on President Biden’s son Hunter Biden. Republicans have argued that Twitter suppressed circulation of a 2020 New York Post article about Hunter Biden in the weeks before the […]

Petito’s parents, Joseph Petito and Nichole Schmidt, noted while the bill comes too late to save their daughter, it may save others in the future.

'Arrests will be made': Boudreaux on Goshen homicides

The reward for information has doubled as authorities scramble to make an arrest following the deaths of six people at one California home.

From shaking and trembling, to sometimes crying; his displays of emotion at the trial have drawn scrutiny.

The company also plans to close five buybuy BABY stores as well as all of its Harmon beauty locations.

Program offers a helping hand for men in recovery

When $4 per gallon gas may return